Quests are a group of objectives and challenges given to the player in exchange for rewards. Many quests unlock content, such as access to new areas or unique quest rewards.

While most quests can be started at any time, many quests have requirements, such as a minimum level or other quests before they can be started. Certain quests also require a certain skill level to be completed (eg. gathering a certain resource).

The In-Game Quest Menu can be accessed by pressing Q or clicking ? icon in the bottom right of screen. Right-Clicking on Active Quests in the Quest Menu allows for Quest Tracking, which displays current quest task on the screen and highlights quest NPCs and Monsters. 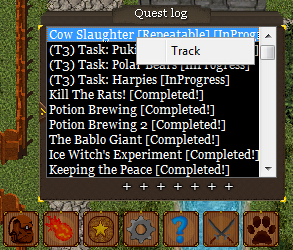 The seven + icons at the bottom of the Quest Log window each open different quest dialogs.

FAQ: How do I cancel a quest/Slayer task?

Retrieved from "https://orake.fandom.com/wiki/Quests?oldid=18531"
Community content is available under CC-BY-SA unless otherwise noted.